Shinjuku Babel is the main area of operation working towards Tokyo's renewal. It is a tower standing at 3000 meters in height with 666 floors. Shinjuku Babel is also the home of the Central Control room, which is the center for all Demon Buster operations.

The entrance to the docks can be found by talking to the Elevator Attendant in the center of Shinjuku Babel.

The entrance to the Residential Area can be found by talking to the Elevator Attendant in the center of Shinjuku Babel.

He will teach you how to mount demons and give you a Nimble Cerberus along with a Leifred Intaglio.

Will comment on how much DB are called on.

Will comment on Demon cards, he also has COMP problems.

He wants some Card sets.

Guard 1 (North from the Innocent (M))

He will let you enter the control room if you have a DB License.

He will welcome you to the second level commercial district.

Will tell you the height of the tower.

Will give you access to the Teleporter Room to get to Protopia.
Requires a DB License to enter.

He will sell Demon Snacks to you.

He is the husband you are looking for.

Will teach you some about Magic.

Terminelle (By Weapon and Armor shops)

Let you use the terminal.

Will take you to Shinjuku Docks.

The Messian will teach you about the Messian Church and offer a map of Shinagawa. For those who are high enough level and/or have at least some leanings towards Law alignment, she will give the map data for free. For everyone else, she might ask for a donation of 5,000

, depending on how far away your alignment is from Law.

The Gaian Priest will offer you the map to Ueno, for a donation. His price is 10,000

if you are Law.

Will teach you all about crafting. 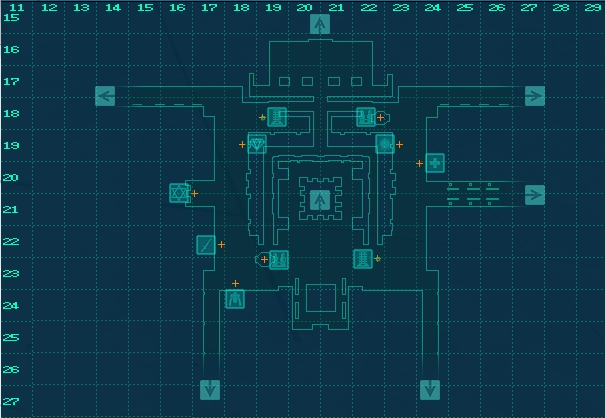