Plasma are the spirits of those lost in the Great Destruction that destroyed Tokyo. Connecting to them will allow you to participate in a minigame. 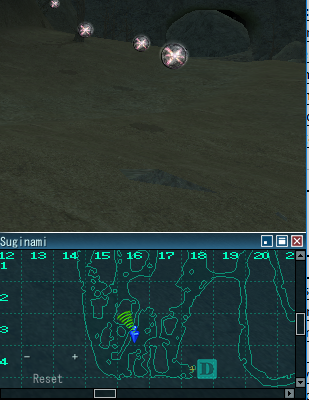 First, the plasma must be available for interaction. You will notice a green cross with a green circle surrounding it when you point your in-game mouse pointer towards the plasma ball. This interaction symbol is common when pressing on doors, NPCs, etc., to get a desired result.

When you press on a given Plasma, a bar will appear in the center of the screen with an orange coloured marker, along with a timer ranging from 5 to 20 seconds on the right side. There is also a bright space on the bar (position is random in the container of the bar) and a STOP button to the left of the bar. The orange marker starts moving from the left edge of the bar to the right edge while the clock keeps ticking. When it reaches the right edge, it starts moving back to the left edge in a fashioned loop.

The orange marker moves while the time ticks

With good timing you open up the plasma

If successful, the plasma will turn into a glowing light blue orb with a white centre. Clicking on this orb will prompt a "Treasure Loot" table that will allow you to take the Remains of Tokyo. You can select an object and press the black "Take" button, or double click on the object for auto collect the selected object. The best option is to press the blue "Take all" button to collect all of them in the table. The plasma stays in open position for roughly 3-7 seconds until it disappears once you collect the contents. 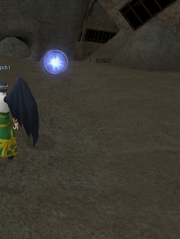 Plasma in open position. You can interact with it if you open it yourself, except if someone else does. 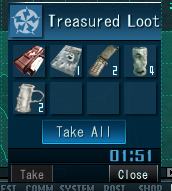 5 remains at the same time is a rare sight. In some cases it's impossible to get 5 in a row.

You can fail the minigame in two ways: you can let the orange marker keep going until the time runs out, or have a bad timing and press/release the STOP button while the orange marker is outside the bright space. This will result with a sound of failure and the plasma immediately disappearing, and the mini-game display in 1-2 seconds after. Plasma ball re-spawns later, 1 at a time.

Depending on the color of the plasma, this could be rather easy, or quite difficult.

Sometimes, you will find a Demonic Compendium Memory, Cards, or other items in some plasma in certain areas. For example, sometimes in White Plasma found in Suginami, you will find Jack Frost cards and Macca, Magnetite. In Shibuya you will sometimes find Altered Magnetite amongst your Remains.

If you do not take the Remains from the plasma, they will disappear within two minutes time together with the plasma ball (most likely same fashion when you take the contents, 3-7 seconds later the ball disappears)

The types (colours), locations and drops of normal plasmas are listed below. There are also Hyper Plasma which are not listed here.

Beside the very long hit spot in the plasma bar that can be found in the beginning area, this one is half as long, but the marker speed remains the same. It follows the values {Ttl=15s, L>R=2.5s, Loop=5s, Spot=0.3125s} as described on the left

Hit area of some yellow (can be called green) plasma have got half the length of 15 second white plasma while retaining other properties unchanged. The values are {Ttl=15s, L>R=2.5s, Loop=5s, Spot=0.15625s}

A different type of yellow with the smallest Hit Area in the game, split in half compared to previous yellow plasma. Furthermore, the colour of the plasma mini-game display normally represents the colour of the plasma. The speeds are the same as 15 second whites and the previous yellow plasma. The values are {Ttl=15s, L>R=2.5s, Loop=5s, Spot=0.078125s}

These plasma appear white/gray/rosy in color, and offer various rewards. They are also the most common, and the easiest to connect to. Abbreviations:

These plasma appear yellow/green, and are more difficult than white plasma. However, they offer more substantially valuable rewards in most cases.

These plasma appear Blue, and are a bit more difficult than white plasma. However, they offer more substantially valuable rewards in most cases.

These Plasmas Appear red colored, and can be found in the following locations.